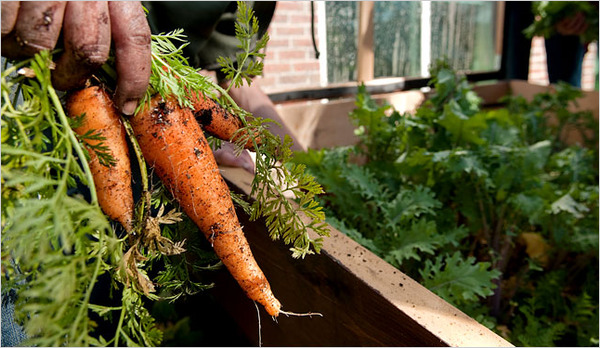 Harvard Pilgrim in Massachusetts is one of many companies that have started gardens as an economical way to encourage a healthy work force.

HERE at the world headquarters of PepsiCo, the masterminds behind $60 billion worth of Mountain Dew, Cheetos and Rice-A-Roni roam polished hallways.

But a five-minute walk away is the organic corporate vegetable garden, where spreadsheets and performance reviews give way to basil starts and black peppermint plants. Employees can sneak out for a quick lunchtime weeding session and cart home the harvest.

As companies have less to spend on raises, health benefits and passes to the water park, a fashionable new perk is emerging: all the carrots and zucchini employees can grow.

Carved from rolling green office park turf or tucked into containers on rooftops and converted smoking areas, these corporate plots of dirt spring from growing attention to sustainability and a rising interest in gardening. But they also reflect an economy that calls for creative ways to build workers’ morale and health.

“It’s almost as if they are saying, ‘Yeah, we couldn’t give you a pay increase and yeah, times are tough, but this is something we can do to help improve the quality of your life,’ ” said Bruce Butterfield, the research director for the nonprofit National Gardening Association.

In corporate language, there is very little benchmarking on the numbers of gardens. But dozens of companies in several parts of the country have recently installed them or are digging them this spring.

That Google, Yahoo and Sunset magazine have started organic gardens is not a surprise. They are, after all, based in Silicon Valley, where the work force is almost as comfortable composting as it is programming.

But the trend has caught on at more-traditional companies, too. At the headquarters for the Kohl’s department stores near Milwaukee, the organic gardens provide vegetables for a local food bank and a place for children at the company child care center to play. Abundant crops of pumpkins and tomatoes grow at the Toyota plant in Georgetown, Ky.

Still, what seems like a good idea in the conference room doesn’t always translate to the field. People don’t always follow through. It’s the same dynamic that fills the office refrigerator with old yogurt containers and moldy lunches.

At PepsiCo, most of the plots are still weedy and empty. The weather has been cool and so, gardeners say, has enthusiasm. Last year when the company first turned over a plot the size of two tennis courts to peppers and tomatoes, 200 of the 1,450 employees here signed up, mailroom workers and midlevel administrators alike. This year, the volunteers dwindled to about 75, and many of them have yet to ready their plots.

So on Tuesday, Anu Malhotra from the food services division pulled on her gardening gloves and yanked weeds from small squares of land that weren’t even her own.

“Corporate strategies had two plots last year, but they were always traveling, so we just kind of took over,” she said.

At Aveda, which offers on-site massage and organic cafeteria food at its headquarters near Minneapolis, the garden is a chance for its 700 employees to take a break from their desks and take home fresh produce. Workers pay $10 for the season and in return, they get a share of the bounty. Picking up a hoe is optional, but encouraged.

“It does seem like work, but it’s a different kind of work from our regular workday,” said Peggy Skinner, an employee who pushed to have the garden installed.

Aveda employees sometimes need to be cajoled to take their turn at the weeds. This year, to keep on schedule, Ms. Skinner has devised a chore calendar and suggests twice-weekly gardening sessions. Reminder e-mail messages will be sent.

For some employees, beanpoles quickly become just another part of the office scenery. On a visit last fall, the special self-watering “earth box” container garden on the Google campus in Mountain View, Calif., was filled with fewer actual gardeners than with workers hurrying through on their way back to their desks, cafeteria trays filled with free food balanced on their laptops.

Nevertheless, the editors of Human Resource Executive magazine were so taken with the corporate-garden concept that last month they named the garden run by the employees of Haberman, a Minneapolis-based public relations firm, one of the top five benefits ideas of the year. True, some of the 24 workers at the firm still enjoy an afternoon mocha, but they also reach for the brussels sprouts and cucumbers packed into the company refrigerator. Even a scant crop of peas was passed around the conference room table as a snack. Enlarge This Image

Employees at the health care company Harvard Pilgrim in Wellesley, Mass., grew radishes, carrots and beets over the winter in cold frames.

Kim McMartin, who lives in a condo in downtown Minneapolis, had never planted a thing until she stuck some green bean seeds into the ground at the Haberman garden last summer. Some were planted too deep. Others were too shallow. As a result, her beans came up crooked.

This year, she vows to do better.

The new corporate green thumb is not necessarily a sign that American business culture is becoming more agrarian-minded, said Peter Cappelli, director of the Center for Human Resources at the Wharton School of the University of Pennsylvania. It’s more about the popularity of backyard gardening.

A National Gardening Association survey done in conjunction with Harris shows that 41 million Americans grew fruits and vegetables in 2009. That’s about 13 percent more than the year before.

In many cases, employee groups asked for the gardens. Sometimes, managers suggested them to help supply a food bank or as a team-building activity. It turns out that building tomato trellises together can help erase office hierarchies.

“It takes the politics out of the job,” said Sheila Golden, a senior manager at PepsiCo whose team grew what everyone agrees were the best tomatoes in the corporate garden last year. “Everybody is on the same level in the garden.”

Another beneficiary can be the company cafeteria. Best Buy planted a garden at its headquarters in Richfield, Minn., to help improve the food it serves to 4,600 employees.

“I really looked at it as what difference does a little bit less shrubbery make to my employees? Not much,” said Ian Ellis, director of corporate facilities. “But having fresh herbs and fresh tomatoes would make a big difference.”

A small plot or a few containers can cost a company less than $1,000 to install. At the higher end, Chesapeake Energy, a power company, is finishing a $500,000 garden this week that fills a city block just east of its main campus in Oklahoma City with container beds, gardening sheds and water sources. And there are ongoing expenses, like paying someone to tend the crops when employees can’t.

Cafeteria cooks may be delighted to get fresh herbs and vegetables, but managers can have other concerns, said Kent Buell, a resident district manager with Bon Appétit, the food service company that has installed kitchen gardens for 12 of its 80 corporate clients, including Best Buy, Intel and Target.

“A C.E.O. of a Fortune 500 company loses some control when they have a garden on the premises,” he said. “They worry about supply chain. They have the health and safety committee weighing in. They worry about what it brings to the brand.”

Finding arable dirt can be a challenge. Many corporate headquarters are surrounded by acres of empty land, but the soil is often mixed with fill from building construction. And all that sod in the corporate business park has been kept green with chemicals.

Then there are more mundane worries, like how to dress for a day that includes both garden work and a budget meeting with the boss.

Harvard Pilgrim, a nonprofit health care company with 1,150 employees in New England, planted gardens at its campuses in Wellesley and Quincy, Mass., last year. Some of the neophyte farmers change into their gardening clothes at the end of the day. Others get down in the dirt every morning and then use the company showers.

Tammy Binette, 40, arrives at the Quincy branch 15 minutes before her 7 a.m. receptionist shift so she can water the crops. She harvests at lunch and sometimes drives extra produce to the local food bank.

Since all the beds are raised and the paths between them well tended, Ms. Binette just goes out in her dressy work shoes, taking them off and walking barefoot in the grass on nice days.

“I even went out there in stiletto heels a couple times,” she said.

What’s a Mother to Do?

Turning the Farm Bill into the Food Bill